‍Also known as liquid submersion cooling, immersion cooling is a method of submerging computer components (or full servers) in a thermally, but not electrically, conductive liquid (dielectric coolant). Still rarely used for the cooling of IT Hardware, it is becoming popular with innovative datacenters around the world. IT Hardware or servers that are cooled using immersion cooling don’t use fans and the heat exchange between the warm coolant and cool water circuit usually occurs through a heat exchanger (i.e. heater core or radiator).

Some extreme density supercomputers such as the Cray-2 and Cray T90 use large liquid-to-chilled heat exchangers for heat removal. The fluid used must have sufficiently low electrical conductivity not to interfere with the normal operation of the computer. If the fluid is somewhat electrically conductive, it may be necessary to insulate certain parts of components susceptible to electromagnetic interference, such as the CPU. For these reasons, it is preferred that fluid be dielectric.

Is immersion cooling the same as water-cooling?

Immersion cooling systems typically once had a higher fluid cost than water cooling, but this has shifted.

A wide variety of fluids exist for the purpose of immersion cooling, with the most suitable being transformer oils and other electrical cooling oils. Non-purpose oils, including cooking, motor and silicone oils have also been successfully used to cool computer servers.

Submer SmartCoolant liquid – our very own immersion cooling fluid solution – is a dielectric, synthetic, proprietary fluid, is certified as 100% non-hazardous and biodegradable according to OECD 301. The properties of the SmartCoolant fluid allow for a higher heat transfer performance than air.

What different types of immersion cooling are there?

Depending on the properties of the coolant, there are various immersion Cooling methods:

Single-Phase coolant never changes state, nor does it boil or freeze, always remaining in its liquid form. The coolant is pumped into a heat-exchanger where heat is transferred to a cooler water-circuit. This technique uses “open baths“, as there is little to no risk of the coolant evaporating: 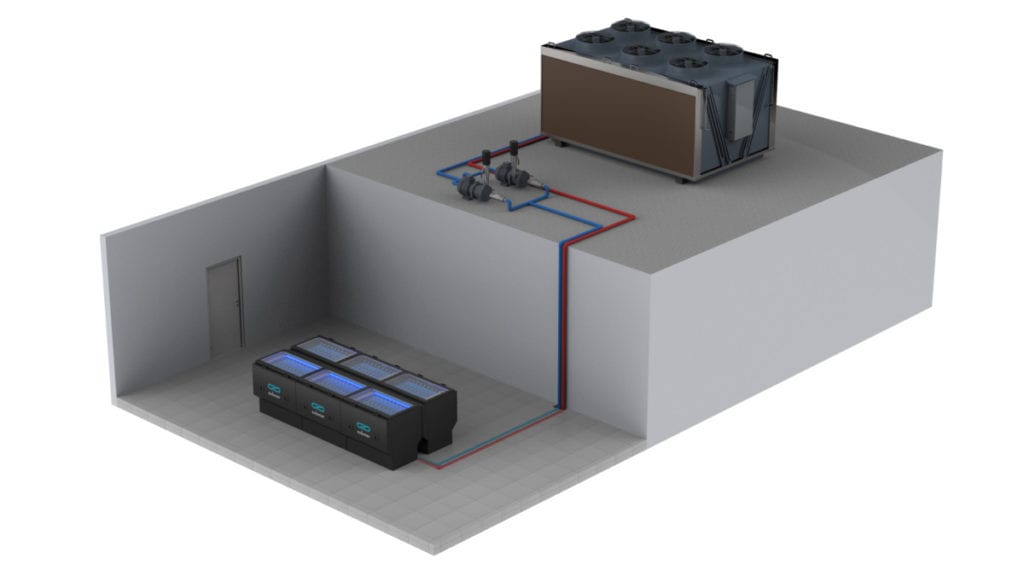 In two-phase cooling, the working fluid can exist in either a liquid or gas state. This method takes advantage of a concept known as latent heat, which is the heat (thermal energy) required to change the state of a fluid. The working fluid is cooled when it reaches its boiling point, and will remain at this  saturation temperature. Energy is transferred from the heat source into the working fluid, causing a portion of it to boil off into a gas. Once this occurs, the gas rises above the fluid pool where it is then condensed back to saturation temperature. This causes the fluid fall (rain) back into the fluid pool.

This cooling method requires semi-open baths, which means that when the system operates it is sealed to avoid evaporation of the coolant. 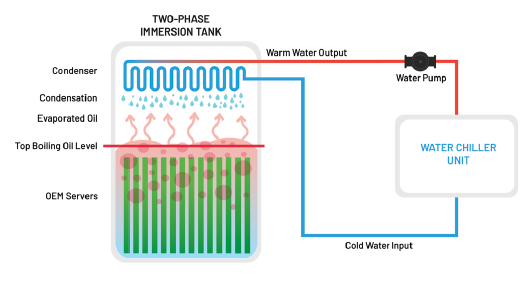 ‍In two-phase or even some single-phase immersion cooling fluids, evaporation can pose problems, and the fluid may need regularly refilled or sealed inside the bath’s enclosure. Two-phase coolants are also extremely expensive and the impact of the vapour on people operating the baths is still largely unknown. You can learn more about the differences between single-phase and two-phase immersion cooling in our blog.

At Submer, we use a special synthetic dielectric coolant, specifically designed for immersion cooling. One of the biggest advantages about our coolant is that it is entirely biodegradable.

Our SmartCoolant is a single-phase immersion coolant, and so we use a 22U and a 45U open-bath system which is designed for easy day-to-day operation in any datacenter.

Contact Us and reduce your datacenter running costs now!